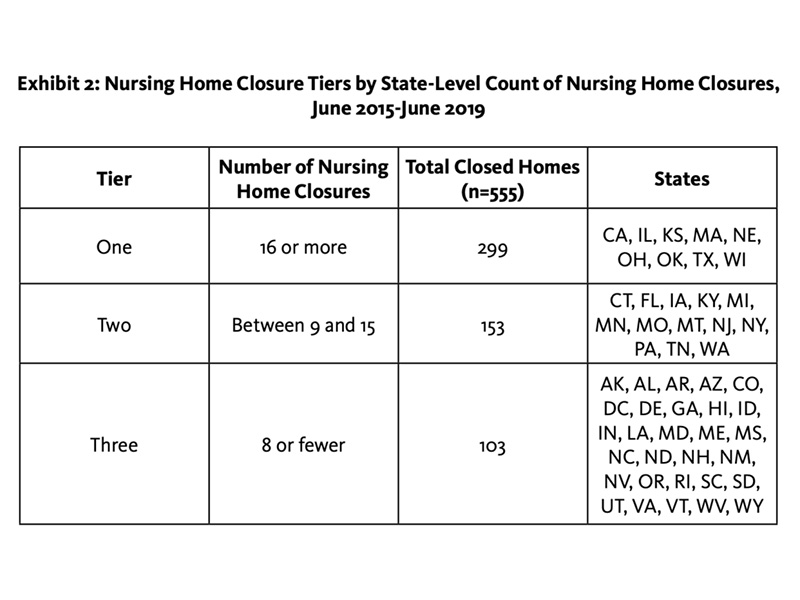 Quality isn’t a deciding factor when a nursing home closes. So suggests a new report that  has found that both high- and low-quality providers are among the more than 550 facilities that have closed since June 2015.

“It is not just low-quality providers that are closing,” said Brendan Flinn, LeadingAge’s director for Medicaid and home- and community-based services policy.

The LeadingAge report, which examined closures of certified nursing homes and what it means for the industry, revealed that a total of 555 U.S. nursing homes have closed between June 2015 and June 2019, which represents about 4% of the total number of facilities in operation.

“There are many reasons that nursing homes are closing,” Flinn told McKnight’s. “Some may be closing for reasons related to business operations, such as selling land or involvement in another sort of real estate transaction. Low reimbursement rates may be a factor, too. As a result, even providers who are delivering high-quality care may find the business challenging, and for various reasons decide to move in a different direction, whether in response to shifting consumer demands for care or to address an operational need or goal.”

Findings also showed that Medicaid reimbursement is not covering the true cost of nursing home care, while occupancy has decreased from 82.3% to 80.5% during the time frame.

“Other factors to consider as contributors to the shutterings include inadequate Medicaid reimbursement (most states do not pay enough to cover actual cost of care) and changing consumer preferences coupled with Medicaid long-term services and supports rebalancing, shifting more money to home- and community-based settings,” Flinn explained.

The closures aren’t a “monolithic problem” and don’t have a specific cause, according to Flinn.

“So to say whether the trend can realistically be slowed or reversed is not within the scope of this specific investigation,” he explained.

The report makes several recommendations for how to address the closures. They include increasing advocacy efforts for additional Medicaid funding, designating critical access nursing homes, and reviewing current nursing home regulations “to separate those that are useful contributors to ensuring quality care from those that are costly and unnecessarily burdensome,” said Flinn.

“Many current regulations are not evidence-based, and the survey and certification processes do not always return accurate and reliable findings,” he added.

Flinn said providers can also respond by considering the expected “boom” in seniors, the impact the volume will have on the industry and how they deliver aging services.

“The [expected boom] will create a new pool of potential service recipients with varying levels of need and desires for where and how they receive services,” Flinn said. “While they may be open to nursing home care, they may also prefer more community-based options, such as adult day services, PACE and home health. By creating robust networks of aging services that meet all sorts of people’s needs, nursing homes cannot not only deliver an integrated network of services, but also create for themselves sustainable, diverse streams of revenue to support the services they promote.”

Creating Rituals To Honor The Dead At Long-Term Care Facilities