Retirement Security Is On A Treacherous Path, New Report Warns 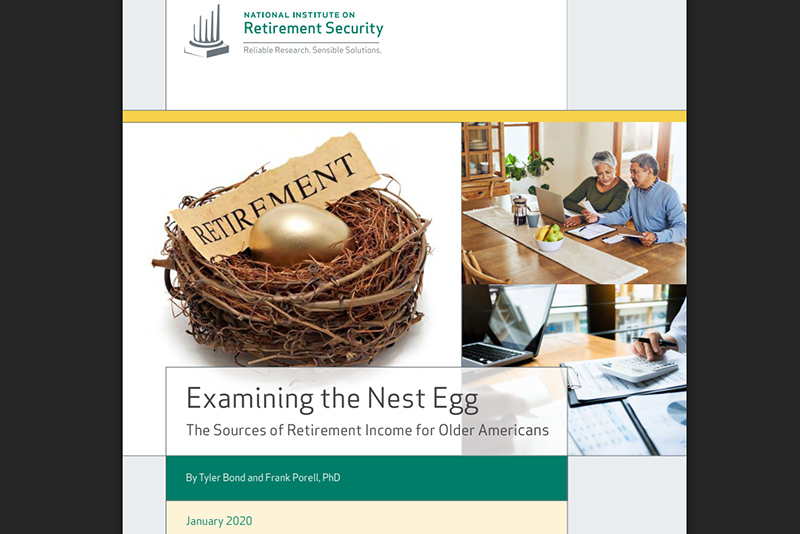 Retirement security is on a treacherous path for the future with dwindling pensions and proposals to cut Social Security, warns National Institute on Retirement Security Executive Director Dan Doonan in his introduction to a report released today on the financial state of the elderly in America.

The most surefire way to achieve a secure retirement is to have income from a three-legged stool of a defined benefit pension plan, a 401(k) combined with other personal savings and Social Security, asserts the NIRS study. Yet only about 7 percent of seniors have that ideal combo, the report notes.

The study calls on Congress and the president to expand Social Security benefits as a potent tool to reduce poverty among the elderly.

A 10 percent increase would lift 500,000 seniors above the poverty line, NIRS figures.

Racial minorities are especially vulnerable to retirement hardships, according to the report.

It estimates that with a median annual retirement income of $23,292, whites have an average of 38 percent more yearly than blacks and about 72 percent more than Hispanics, mostly due to higher paying jobs during their working lives.

College grads have about double the retirement incomes on average than persons with a high school education at most —$51,553 compared to $25,524.

According to the report, 22 percent of American workers participated in a pension plan in 2017 while 64 percent of workers in the private sector had access to on-the-job defined contribution plans such as 401(k)s in 2018 either alone or in combination with pensions.

“If workers do not have access to a retirement savings plan through their employer, they are much less likely to save for retirement and will have less income in retirement as a result,” the NIRS authors say.

One result of inadequate money coming in during retirement, cautions the study, is hunger.

The researchers estimate 9.7 percent of the non-working elderly have food insecurity. The number falls to 1.6 percent of those with the benefit of the three-legged stool but climbs to 13.7 percent of the retired who rely strictly on Social Security.

The analysis is based on the Census Bureau’s 2014 Survey of Income and Program Participation (SIPP) and the 2014 Social Security Administration Supplement on Retirement, Pensions, and Related Content conducted by Census.

Contact a qualified Elder Law Attorney if you have questions about your estate planning. Visit the directory of the members of the Ohio Chapter of the National Academy of Elder Law Attorneys at this link.
Read full story

The Monetary Benefit of Delayed Retirement