New laws allow visitors in a health care facility, even during an outbreak 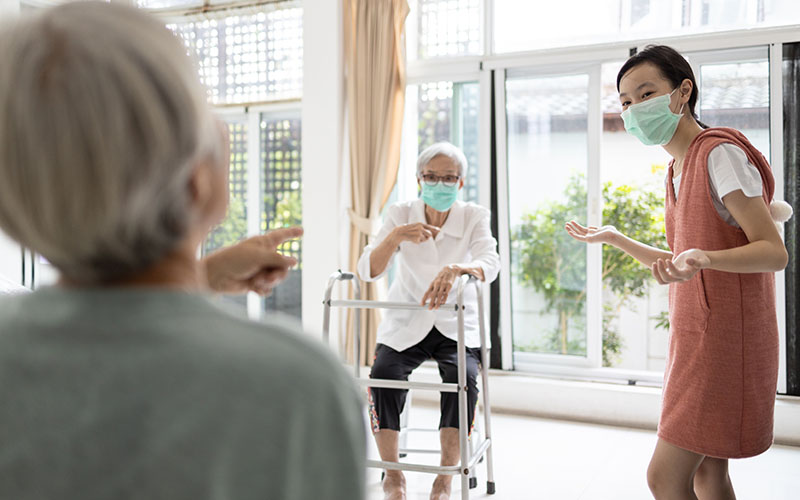 Jean White’s mother has dementia and moved into a memory care facility near Tampa, Fla., just as coronavirus lockdowns began in the spring of 2020. For months, the family wasn’t allowed to go inside to visit.

They tried video chats and visits from outside her bedroom window, but White said that just upset her mom, who is 87.

White’s mother couldn’t grasp why she could hear familiar voices but not be with her loved ones in person.

When the family was allowed in to see her, disruptions continued. White said the facility kept shutting down anytime a resident or staff member had the virus.

All the while, her mom’s memory was deteriorating.

“You know it’s going to happen, but still, when it does. And when you haven’t — when you miss time that you thought you had,” White said, speaking haltingly and with emotion as she talked about her mother’s decline.

Restrictions on visitation have relaxed in recent months, White said, but she questions whether protecting her mom from COVID-19 was worth the lengthy separation.

“What anxiety, loneliness and confusion she must have had – I think I would have rather her seen her family,” she said.

On March 11, the Florida Legislature passed a bill that will make it easier for people like White to see their loved ones in health facilities. Gov. Ron DeSantis is expected to sign it in the coming weeks. At least eight states have already passed similar laws, and several others have bills under consideration.

Some laws, like those passed last year in New York and Texas, are specific to long-term care facilities. They allow residents to designate essential caregivers, also known as compassionate caregivers, who are allowed to visit regardless of whether there is a health crisis. Texans also added protections in their constitution.

Hospitals and long-term care facilities set pandemic restrictions on visitors to protect patients and staffers from infection. But supporters of these news laws say they want to ease the restrictions because the rules may have harmed patients.

An Associated Press investigation found that for every two residents in long-term care who died from COVID-19, another resident died prematurely of other causes. The report, published in late 2020, attributed some of those deaths to neglect. Other deaths, listed on death certificates as “failure to thrive,” were tied to despair.

Even in regions of the U.S. with low rates of COVID, risk of death for nursing home residents with dementia was 14% higher in 2020, compared to 2019, according to a study published in February in JAMA Neurology.

The researchers pointed to factors besides COVID infection that may have contributed to the increased mortality, such as less access to in-person medical care and community support services, and “the negative effects of social isolation and loneliness.

She took a kitchen job so she could see her husband

When long-term care facilities and hospitals began closing their doors to family visitors, patient advocate Mary Daniel, from Jacksonville, Fla., was worried about what might happen to her husband, Steve, who has Alzheimer’s.

“I promised him when he was diagnosed that I would be by his side every step of the way, and for 114 days I was not able to do that,” Daniel said.

To get back inside, Daniel took a dishwashing job at her husband’s assisted living facility so she could see him.

Daniel would work in the kitchen two nights a week, then after her shift go to his room. She’d help him change into his pajamas and lay beside him watching TV until he fell asleep.

“That is really why I’m there, to be his wife, to hold his hand, so he feels that love,” said Daniel.

Daniel has been fighting for visitor rights at the state and federal levels ever since. She’s a leader of Caregivers for Compromise, a coalition with thousands of members. She also served on a state task force that informed Florida’s decision to order long-term care facilities to reopen to families in the fall of 2020.

“We understand that COVID kills, but we want to be sure everyone understands isolation kills too,” Daniel said.

While the visitation laws open the doors, they also include provisions to protect patients and staff by directing facilities to establish infection-control measures that families must follow to enter. That could mean mask requirements or health screenings. In Florida, protocols for visitors cannot be more stringent than they are for staff, and vaccination status cannot be a factor.

Also in Florida, facilities will be able to ban visitors who don’t follow the rules. That’s fine with advocates like Daniel.

“I mean we’re not here beating down the door saying, ‘You can never kick us out and I’m going to be here as long as I want to,'” she said. “We want to protect their health, we want to be sure that everything is safe.”

DeSantis, who appointed Daniel to the 2020 task force, was a vocal supporter of expanding visitor access.

“COVID cannot be used as an excuse to deny patients basic rights, and one of the rights of being a patient, I think, is having your loved ones present,” DeSantis said at a news conference in February.

Advocates: Amanda Bynes’ conservatorship case is not the norm